As my previous post alluded to, the 2016 season was certainly a tale of two halves.  The good half was the first half.

The winter was awesome, training was really solid and above all it was consistent. The power numbers were the highest I had ever see both in terms of peak power and threshold power. Heading into a break to see family in Europe in February, I was confident that the fitness was looking good for the 2016 season. During the first few days in Europe, I was really sick (vomiting, chills etc) and passed out with convulsions one evening....not good! Not surprisingly I felt pretty weak the remainder of the trip and just put it down to some kind of virus/food issues. Workouts were light and just tried to have a rest.

Coming back an odd thing happened on the next couple of workouts where my HR spiked for about two minutes to beyond what I normally see.  I thought it was odd but put it down to either the travel or just an anomaly.  It didn't happen again and training progressed on through the Spring with no issues.

We then got into racing season and I starting out flying..... 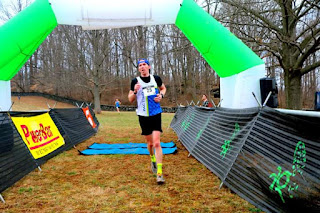 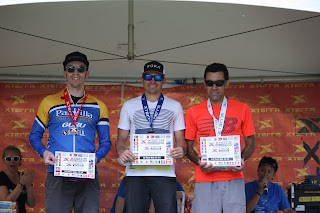 The race at Oak Mountain in Birmingham, AL was by far the best race of the year for me.  I had peaked at just the right time and executed on race day to finish 8th amateur, 2nd in age group and qualify for the World Championships in Maui (We had already decided not to go in 2016). The course was perfect and suited my style of racing, if you race one Xterra I would definitely recommend Oak Mountain!

The season turned around after Greensboro in June. It was after that race that I began to have some serious issues relating to elevated heart rates while exercising. So much so that a visit to the ER was needed and after a series of scans and visits to cardiology specialists it was determined that the issue was SVT. Supraventricular Tachycardia is the racing or fluttering of the heart and in my case it would increase my heart rate from a normal 125bpm to 200bpm and beyond for 10-20minutes.  It is essentially the electrical circuit of the heart getting caught in a rapid loop before working itself out of it.  Everything points to this as being something that I can live with and it doesn't occur every workout so it is really a quality of life issue. If it begins to be more regular then there are surgeries to fix the electrical loop but as much as they say it is "routine", I'm not convinced that any heart procedure is routine.  Was it related back to the issues and illness in February? Perhaps we will never know but surely not a coincidence.

The back half of the season was very much impacted by the SVT as training was reduced while we worked through the doctors visits etc and although I did race once more at Xterra Appalachia and a few cyclocross races I wasn't exactly in race shape to compete.  I spent more time on my mountain bike in the Fall and begun to look forward to the 2017 season. 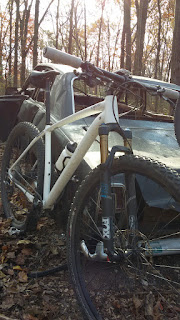 Since late August the SVT episodes have been few and far between and those that have occurred appear to have been related to dehydration issues such as the 2nd workout of the day where I have been lazy or not in the situation to properly hydrate after the 1st workout.  The past month or so I have been on top of my hydration and it certainly seems to have had an impact.....something to keep an eye on as training ramps up for the 2017.

So what now?  For starters I want to get back on the website updates, I got out of the habit in 2016 and even if not many people read it I like to just keep it updated and think about things.....next post to look ahead and see what the goals for 2017 are!