For the past few years I had heard about American Zofingen, mentally I had put it on the bucket list of races to do, 2011 was the year. Yeah, I'll sign up for long course, might as well go the full monty and get my money's worth!

WOW....is all I can say about this race. Granted I probably wasn't as prepared as I would have liked to have been for 104 miles of pain and suffering (that's what opening a bike store does for your training!) but even so there is a reason this is touted as the hardest duathlon in the U.S.

We headed up on Friday and after the sign-on Saturday morning we drove around the course to see how bad it was really going to be.....the first climb on the bike straight out of transition is 8.5% and a mile long, welcome to Mohonk! The 2nd major climb over Minnewaska wasn't quite as steep but longer. On Saturday with clear weather the course looked enjoyable in a sadistic kind of way.....

Waking Sunday however, the forecast was right and it was already raining, oh have I mentioned that the run was a trail run? I dusted off the trail shoes and shortly before 7:30am gathered under the starting banner (which looks as though it was made out of old Xmas decorations!)....with the sound of bagpipes we were off. 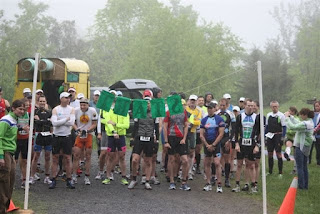 Run 1 The first 5 mile run was actually enjoyable and perhaps as a AmZof noob I was guilty of not really knowing what was ahead of me. Halfway around the lap I found myself running with fellow Brit Ben Lloyd, who I think took great joy in telling me how hard Mohonk is on the 3rd lap! The trail at this point was pretty good but with the rain continuing to fall and plenty of racers to come, it could be a mess later on. Coming into T1 at about 38mins I was pretty pleased.

Bike Now the real fun began. The 1/2 mile dirt road from T1 to the road was about as safe as a Cat 5 race and immediately after turning onto the course "proper" it was straight up Mohonk....the 8.5% for a mile. 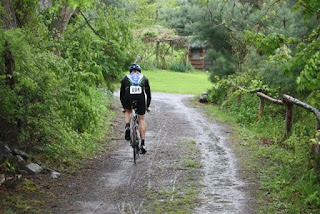 Getting up Mohonk any time isn't easy but with another three loops it meant we had to do it another two times....mmmhhh! Now the weather was really messy and descending over the other side was nerve racking. Not having ridden the course I had no real idea of the descent and combined with trying to see in pouring rain I was glad to turn off onto Butterville Road. Pushing up through to Minnewaska, I didn't feel as though I had much power in the legs and thought that this might be a long, long day. By the end of lap 1 (1hr 39mins) I was freezing and picking up my windvest probably saved my day, without that I'm not sure I would have been able to continue.

The 2nd lap (1hr 43mins) was all about trying to get my calories in and keeping to my watts. Knowing the course now helped considerably and despite the mist/fog that rolled in throughout the next two laps the descending from the climbs was less nerve racking....oh yeah it was still raining off and on! 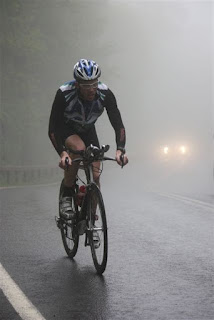 Now "only" the final lap to go and the climb up Mohonk was painful....it was a matter of grinding away in the 39x27 and wishing for just one more click of the gears that never came. I knew that a sub-5hr bike split was out the window and tried to save as much energy as possible, easier said than done! Playing cat & mouse with a few other Long Courser's on the final half of the lap made it more fun before hitting the sketchy dirt road hills heading into T2. Final bike numbers were:

At T2 I saw my competition....I thought I could take him on the run! 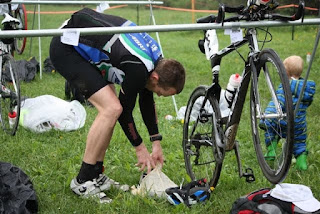 Run 2 Running through the gazebo the first time wasn't too bad, not many people from the short course or the F1 race had begun to party yet, the kegs were tapped though! The first lap was decent after the legs realized that they were meant to be running and not cycling anymore. It wasn't great but it was decent and I didn't lose any shoes in the mud like some others had....I power walked some of the steeper hills and ran all the single-track and fire roads. Lap 1 - 47mins. Now the party had begun to get started in the gazebo and the wooden stairs were noticeably steeper and more slippery......running through to start lap 2 reminded me of the bar in Cheers. As a runner came through everyone turned and cheered, encouraged and then immediately goes back to the conversations they were having. Lap 2 (53 mins) was less pretty than the 1st but better than the 3rd. Things were rapidly going downhill (well I wasn't going anywhere rapidly but you get the idea), I was really hungry and was taking down double lattes (of the powergel variety) like there was no tomorrow. Coming by the single-track above the gazebo all I could smell was the burgers on the grill, perhaps foolishly I didn't grab one as I went through to start lap 3 (more cheers from the bar crowd!)

Lap 3 was definitely survival mode and knowing that it is the last lap didn't help one bit. The power walking had spiraled into an uphill shuffle and the running, if it could be described as such, must have looked downright painful. It was just as I came off the final downhill that I made a bit of blunder.....as I slowly overtook another racer, I mistakenly thought that she was finishing the final lap of the F1 course so encouraged her that she was close to the finish. It was only some hours later as I sitting in the gazebo with my beer and burger (which were all great!) in comfortable warm clothes that I turned round from my conversation and cheered her on to the finish of her Long Course race....when I passed her she had been finishing her 1st lap of 3! oops.... 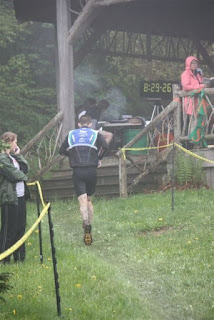 Despite the weather and my lack of decent preparation, this race was AWESOME and I look forward to coming back in 2012.....hopefully better prepared and on a mission to break 8hrs.
Posted by Iain Banks at Wednesday, May 18, 2011

Great write up. Man, epic weather. I did it in 2008 and I can honestly say that it was the hardest and most satisfying endurance event I've ever done. Completely wrecked afterward, but loved every second of it. The grass roots vibe and the folks there put on an incredible event.