The first 1/2 ironman of the year took place on Saturday and it was the first real test of the season so far. As I mentioned in the earlier post, there was some good competition in this race and it would allow me to gauge my fitness for the later 'A' races of the year.

Everything in the lead up to the race had gone pretty well, I got a good nights sleep and was raring to go come the morning. The water was a balmy 71 degrees with air temperatures to match, but the wind was gusting big time, up to about 30-35mph. I was hoping that my 160lbs body would be able to keep the bike with rear disk and front deep dish on the road!

As at Rumpass a few weeks ago Lake Anna was looking distinctly choppy, enough that as we started in the first wave, they were still trying to relocate one of the turn buoys that had broken loose. Despite the rough conditions I felt as though I was swimming much better than I did at Rumpass. Perhaps I had more of an open water groove, perhaps it was the new wetsuit or I had just chosen the right people to draft off, but I came out the water in 23mins (yeah the course was a couple of hundred yards short of the 1.2m) and was only 90secs down from the leader and in 12th place. Definitely an A+ for effort there! 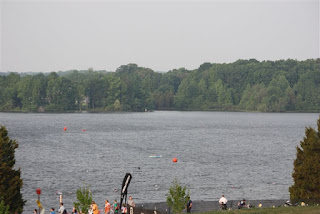 Lake Anna in the morning

Through T1 I must have gained about 5 places as in the first few miles of the bike there was a short out and back section and I counted I was in 7th. Nice way to start the day :-) The bike course turned out to a real doozy of a race, the roads were rolling with some distinct headwinds and with the exception of the leader who was dangling off the front a couple of minutes ahead (it turned out post-race that he had been waved through the turnoff for the out and back section!), there was a small group of 5 who were just riding hard and keeping honest :-) Fortunately I was one of those 5 and it turned into a good tactical battle for almost 56 miles. You don't want to tow the group around for the 56miles but you also don't want to "under" bike the course allowing racers from behind to catch up. In the end it was just a hard and fast bike ride in tough windy conditions. Going across the bridges with the wind coming from the side gave some moments to worry about, but in general it was ok with the FFWD disc and F9R front. 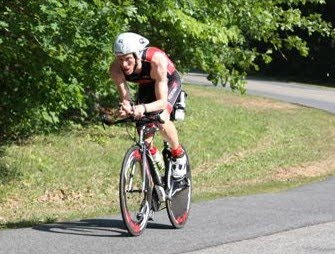 I came off the bike in 2nd place with the 2nd fastest split of the day (2hr 23mins) and was approximately 2mins down on 1st place (it would have been different if he had done the out & back). All to play for with another 2 racers just a handful of seconds behind in 3rd and 4th. Straight out of transition was the steady climb of the course and it was just the 1st time of three that we would have to do it. As such it felt like I was crawling away from T2, but managed to get through the first mile in 6:40! I then hit my stride and was running 6:15's for the next few miles which were more rolling. 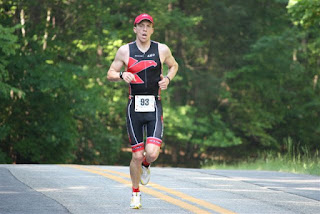 Finally hit the crest of the hill out of T2

I'm not sure if it was the hills or a slight nutrition deficit from the bike (I didn't take in as much as needed) but I wasn't feeling really great on the run and although I was still rolling along at 6:30's, I was caught by 3rd place at about mile 7. I tried to keep with him but through the backside hill he stretched away and I was alone in 3rd. I couldn't see anyone behind and so the aim was to stay on the podium. The run was getting hot, there wasn't any shade and fortunately after 1hr 26mins I finished the run, 3rd fastest of the day and was pleased with an overall time of 4hrs 15mins. The iced water and towels were a godsend! 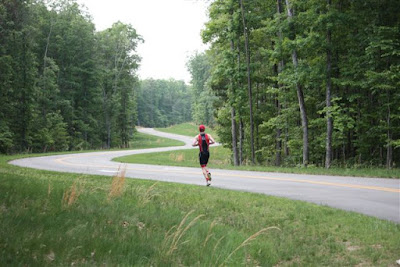 The long and lonely road of an Ironman

First 1/2 Ironman race done for the year, 3rd overall and I ended up about 3mins down on the winner (the guy that passed me for 2nd). It was a great confidence booster and I know that the fitness and form is building nicely for Eagleman 70.3 on June 13th. Once again a big shout out to Kestrel Bicycles, FFWD Wheels, Fluid, DPM Sports and Beaker Concepts.
Posted by Iain Banks at Wednesday, May 12, 2010

Wow good start Mr! Looking good for the season ahead! :-)

that effort at Eagleman would get you a Kona slot??

It could....all depends on the competition that turns up!