Just a quick race report as the Giro starts on Universal in a few minutes and so need to go watch that....oh, the joys of being between jobs. It's like being a pro triathlete at the moment....get up, swim, chill, eat, ride, run, eat, chill, sleep...not a bad life! It's only for two weeks and so I need to make the most of it!

Anyway, this past Saturday was the triathlon season opener at the New Jersey Devilman. The trip up I-95 was surprisingly uneventful for a Friday night but the night's sleep was poor and it felt like I only slept for a handful of hours....nothing unusual prior to big races but for a non-A race not a great sign. Due to the change in race distances this year the field was a little smaller than prior years (only 130 in the Half-Lite) but there were a few big hitters who provided a good test. The swim went by quickly....yes I was fast :-) but the course was marked way short. It was suppose to be 0.9mile but from the time I did I reckon it was closer to 0.6mile. I came out in 12th and set about the bike. 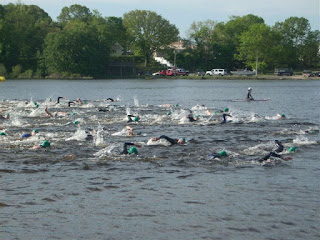 The bike was pretty odd from the start. It was a two loop course of about 20.5miles and from the get-go I didn't feel particularly comfortable. It just felt like I was fighting the bike the whole time and couldn't get into any kind of rhythm. I wasn't smooth and perhaps that came from riding the road bike a little too much lately. More time on the tri bike is needed! In the end I averaged 23mph on the bike (which was actually closer to 42 miles rather than the stated 40.3 miles) for the 10th fastest and was in 6th entering the run.

The trouble was that the leader off the bike had totally blitzed the course and had a 10 minute lead over 2nd place and about 12 minutes on me.....over a 8.8 mile run that was going to be hard to pull back. The run started well as I was rolling along at just over 6min/miles but again it felt a struggle and I was working hard to keep at that pace. By the half-way point I had moved into 3rd and the leader was now only 7mins ahead....I had pulled back 5mins in 4.4miles. Over the remaining half of the run I was hanging on and but moved into 2nd as the leader who had blitzed the bike just fell apart and was walking....Unfortunately I couldn't hang onto 2nd and was passed with just 1.5miles to go and ended up in 3rd. My run time was 2nd overall (1hr) and I finished just under 4minutes behind the winner in 3hrs 6mins. 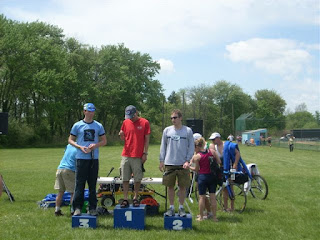 Not a bad start to the season, managed to get onto the podium in the first race, which is always good. There is plenty to work on in the next few weeks prior to Eagleman, primarily getting on the tri bike more and running off of the bike. Got another race at Columbia Triathlon this weekend......All paths lead to Kona!
Posted by Iain Banks at Wednesday, May 13, 2009