Last weekend was the first time that I had "doubled up" and raced twice over a weekend.

Tour of Walkersville was first up on the Saturday and I was off in the Cat 4/5 race at 10:45am. The team plan was to try and get into a couple of breaks and whittle down the field. The fewer people at the finish the better chance of sneaking a victory for Team Latitude/ABRT. The wind was howling big time (even more so than usual at Walkersville) and the cross-winds were causing some gaps to appear by the 2nd lap. Coming round on the third I was planning to just drill it through the start/finish as that was where the crosswinds were separating the field. Before we got there however, a situation coming up past the barn enabled me to jump off the front and gradually drag a few guys clear of the field. In my exuberance though I probably gassed myself a bit as when the group of 10 finally got together coming through the start/finish I was having trouble hanging on! (remember that for next time) 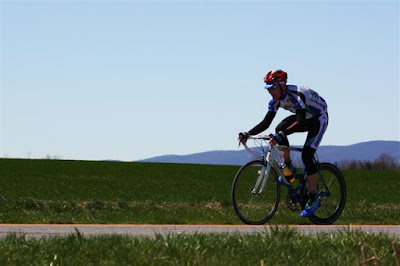 Fortunately, Kyle had noticed and pulled the group back up and then shot off in pursuit of a couple of guys that had gone from the break. With two laps to go we had a rider in the four-man break and they got a handy gap of 30 seconds. It was now up to the three remaining ABRT guys (myself, Kyle and Mark) to make sure that the field didn't get any chase going and we did our best to break up any organization or bridge attempts. We did our job and Kyle managed to get 4th by staying away in the break until the end......sweet, mission accomplished and in the pack (well the remanents of the field) sprint I managed to grab 11th overall. In addition, it was cool for Sarah as she accompanied Amy and they headed out and about on the course to get the best vantage points. Makes a change from just seeing the start/finish area!

The rest of the day was spent enjoying the cooking of the mighty cockroach while manning the feedzone for the later races..... 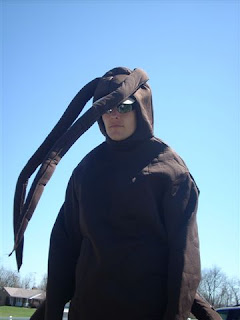 Preparation for another days racing involved dinner at the Old Bowie Town Grille and a couple of beers with the Saturday dinner crowd....they know who they are! At least by Sunday morning the wind has calmed and with the sun shining it looked good for a circuit race.

Having never raced at Tyson's and with my very limited experience in circuit races or crit's, I wasn't really expecting much and just wanted to stay out of trouble. Warming around the course though, I liked the uphill finish and thought that after 20 times up it might be a good course for me. The race ended up being neutralized after a crash on the 2nd lap (not me!) and then by the time we restarted it was just a 30 min hammer till the end. Not ideal for someone with minuscule fasttwitch fibers but at least I was in position towards the front end of the race that with a lap to go I tried to go off the front up the hill. Not surprisingly it didn't work but it strung the field out a bit as we entered the final lap. All in all a learning experience and the weekend as a whole gave me more confidence for races to come.

The main reason why I was able to get off the front is your move off the front. When you guys got the seperation and we let you go it caused a panic in the main field. When I chased your break down hard not many could go. By the time they caught up to your group they were gassed and I was allowed to continue. It was very smart on your part to go where you went. Thanks again ian.