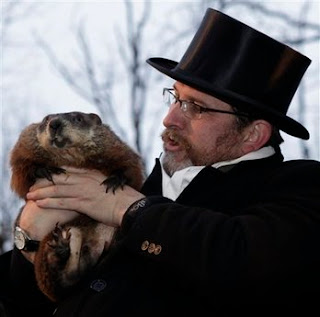 It's that time of year again when Punxsutawney Phil attempts to predict the remaining winter period for the year. I first wrote about this last year when Phil saw his shadow and therefore predicted six more weeks of winter.

Phil was back again today in Gobblers Knob and in front of 13,000 witnesses, he emerged to once again see his shadow and predict six more weeks of winter. Not that it came as much of a surprise really. Since 1887, Phil has seen his shadow 97 times, hasn't seen it 15 times, and there are no records for nine years, according to the Punxsutawney Groundhog Club.

So despite the balmy temperatures of yesterday I wouldn't be putting away the winter cycling tights and thermal jackets just yet!
Posted by Iain Banks at Monday, February 02, 2009