On Saturday Sarah and I headed back out to the Eastern Shore of Maryland as we were booked in on a kayaking tour of the Blackwater Wildlife Refuge. The trip was actually a joint gift from my brother (and family) for our 30th birthdays last year but it had taken us this long to schedule the day. Being quite familiar with the roads of the Refuge it was going to be a nice change to see it from the waterways for once. (You can visit the online Osprey Camera at the Refuge here)

The day was great for kayaking (well for novices like Sarah and I), clear blue skies although there was a little wind and as we met the instructor/guide and the other members of the trip the wind begun to strengthen....it is the Eastern Shore after all! It was kinda cool that we had a relatively small group with only four others besides Sarah and I. We hadn't been kayaking in a long while and was probably both when we were in our mid-teens on some scout or guide trip! Fast forward 15 years and we were quickly trying to remember the bow from the stern.

Before too long we were entering the water and being shown the correct paddle strokes so that the group at least had some control of the kayaks and we could all propel ourselves in the same general direction. So off we went in search of some of the wildlife that call the Blackwater Refuge home. It was at this point that we were told that Saturday was the first day of Duck Hunting Season.....unfortunately we were kayaking in the afternoon and would be getting back to the put-in point at dusk! By that late in the day we were hoping that the hunters had:

a) Managed to bag at least one duck and weren't getting anxious about going home empty handed.
b) Hadn't sunk a few six-packs through the day.
c) Could tell the difference between six kayakers and six ducks.

All you want when you are sitting in the middle of a wide-expanse of water is an anxious, inebriated gun-toting Elmer Fudd....... 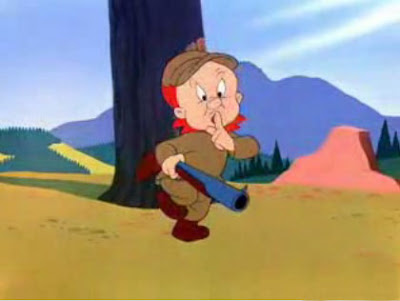 Luckily we only saw one hunter who was tending to his decoy ducks but we did hear some shots in the air and begun to hope that the life-vests were bullet-proof.

We were out on the water for about three hours and managed to see a handful of bald eagles (the refuge has the 2nd largest bald eagle population on the east coast north of Florida), some herons and countless kingfishers....we were hoping to see some sika deer, who can swim supposedly, but they are primarily nocturnal so we had no luck! It was a great workout as well and both of us came out of the water starving. As it was getting late we stopped off on the way home and decided to "eat good in the neighborhood"....only the best for us :-)

Would we rush out and go kayaking again....probably not every weekend but it was a cool experience and great to see some bald eagles in their natural habitat.
Posted by Iain Banks at Monday, October 20, 2008