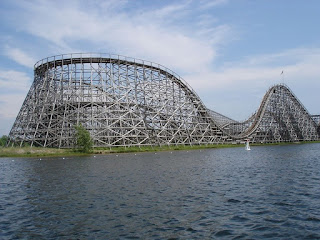 This week has been bit of a roller-coaster in terms of training and work, and to be honest there is a slight lack of motivation, particularly when it comes to swimming. I could probably ride and run all day but the thought of swimming and going to the pool isn't exactly enticing when the mornings are cold and dark.

Since ChesapeakeMan I have obviously felt tired and I could easily have canned the season then and there and had a good rest before thinking about the strategy and training for 2009. The last race of the season at the 70.3M Worlds is only three weeks away and I need to at least maintain fitness for that. I did have an easy week after Ironman and then last week I began to get back into some training but it has been a struggle to get up in the morning and I have been relatively lacklustre. It's been a long season and I am in need of a decent rest!

This week has been slightly better but was disrupted by some unexpected demands at work and so I have pretty much decided that I will train to maintain my fitness from Ironman as there is little to be gained except more tiredness in the next two weeks.

I did manage to get out on the mid-week ABRT club ride last night and that felt good to blow away some of the Hammerfest cobwebs....it is hard though as most people are winding down now and are not particularly interested in flogging themselves! It was a good ride with a brisk 50min run afterwards. Besides you can't complain when the afternoon temps. have been in the high 70's/low 80's and we are in the middle of October.

Tonight we head off for University of Maryland "Midnight" Madness (although the start at 7:30pm just isn't the same anymore!) to see the 2008-2009 basketball squads. Tomorrow we make yet another trip over to the Eastern Shore to go on a kayak tour around the Blackwater Wildlife Refuge.....essentially around the same areas at the Eagleman, ChesapeakeMan and Church Creek courses! I think most of the wildlife will probably recognise us :-)
Posted by Iain Banks at Friday, October 17, 2008