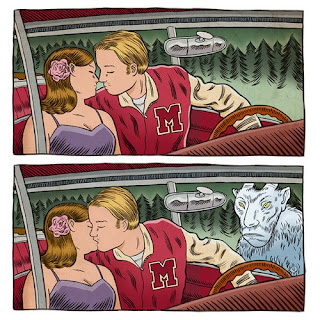 There is a legend in our local area about the "Goatman of Prince George's County" and just recently a local newspaper ran an article about the legend.....much to my surprise I learnt that the legend takes place in one of my favorite training areas.

Rumor has it that back in the early 1970s, a scientist working at the Beltsville Agricultural Research Center in central Maryland was performing an experiment with goats when something went terribly wrong. He was doing tests on manipulations of goat DNA, when one of the subjects attacked and bit him. When the saliva from the goat entered the scientist’s bloodstream he immediately began undergoing changes from the goat’s DNA combining with his own. The man began to morph into a half-man, half-goat creature and escaped the lab into the nearby surrounding woods. Following this incident there have been eye-witness accounts of Goatman causing havoc around the northern Prince George’s County area. One account occurred when two high school students pulled off to the side of the road late one night after their high school prom. The boy began to attempt to make out with the girl against her will. A struggle ensued as she opposed his actions, but the feud was abruptly stopped when a noise was heard underneath the car. The boy got out of the car to see what it was as the girl stayed frightened in her seat. As the guy looked underneath the car, the girl witnessed an image which would stick in her mind the rest of her life. On the other side of the car she witnessed the Goatman, a seven-foot tall creature which was human from the waist up, and goat from the waist down. It starred at her for a solid second, his green eyes glowing in the dark night. The creature then made a quick move and disappeared, and the next thing she heard was the violent screaming of her prom date echoing through the deserted area. After the screaming halted, she heard a faint high-pitched laugh fade away into the distance. She remained completely still, crouched on the floor until the police arrived the following day.

Other accounts of the Goatman include throwing animals off overpasses on secluded roads, and the Washington Post actually ran an article in 1971 blaming the creature for the death of a Prince George’s county man’s dog. Finally, another version of the legend accounts the Goatman damaging automobiles with an axe.

For the past five years I have regularly been riding around these back roads and as of yet haven't come across anything resembling such a creature......just to make sure though perhaps I won't go on those roads tonight!

Did we spot the Goatman attempting to eat a donut in an earlier blog?

Ahhh.....thats not very nice, although the donut was!