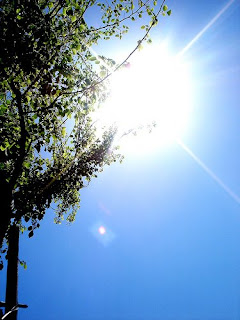 Wow....is all I can say after my 1-hour run this morning! I headed out at 6AM to get a run in before work and quickly decided that swimming in the morning is the better option. Listening to the local news radio while running, the weatherman stated it was 80 degrees and high humidity....IT WAS 6AM! The run was bit of a struggle as well, not only was it hot and humid, it was with an empty stomach and not exactly the best of preparation from the night before....

I think I must have jinxed myself in my last post regarding meeting the key workouts for the week. Tuesday's workouts were hit dead on but then Wednesday's long evening run was shortened when I worked later than expected (or wanted!). Thursday was a complete wash-out and therefore was an unscheduled rest-day. I should probably call it a non-exercise day as meetings and public hearings got me home at 10:00PM (and in bed at 10:30PM, who says we don't live an exciting life!).

And that brings me to how nutrition plays such a huge part in the training/racing and overall lifestyle of triathlon (and I guess it should be life in general). As I mentioned earlier my run this morning was bit of a struggle and yes I did run without first having breakfast but it was primarily due to not being able to prepare correctly the night before.

Typically Sarah and I have dinner at about 8:30PM (after training) and then an hour before bed will have a "dessert" such as fruit, pretzel, yogurt etc. That generally sets me up for a morning workout and if swimming I will eat a couple of slices of raisin bread on the way to the pool. In recent weeks we have made a more conscious effort to limit added sugar in our diet and it appears, so far, to be having a positive effect. I feel as though I have a more constant energy level rather than having peak/troughs throughout the day and certainly do not find myself looking through the cupboards for "treats" as much as I was. I'm sure the long-term benefits will have a much greater effect on both training and health in general, even if it does mean that we spend twice as much time in the grocery store looking at the nutrition labels!

With the heat of the Mid-Atlantic upon us for the summer season, we can't do without a weekly trip to Rita's for some frozen custard and that is the sugary treat for the week....that's what gets you through a 95 degree 5-hour bike ride, knowing a vanilla/chocolate twist frozen custard with caramel is waiting for you later in the day :)
Posted by Iain Banks at Friday, June 27, 2008