Well this was the first big test of the season as it would show how the winter/spring training had gone. From my last post I had listed a few goals for this race....swim a PB, ride strong and run to my potential, all of which would probably lead to a new overall PB. After a long and arduous journey up I-95 on Saturday afternoon we took care of the usual pre-race business of registration and carbo-loading (at Marcianos in Vineland, NJ). Fortunately we were staying only about 20mins away from the race site and so the alarm was set for a relatively leisurely (for triathlon starts anyway) 6:00AM. Waking up in daylight always helps in my opinion and after a quick breakfast (the usual bowl of oatmeal) we were off to the race site in foggy conditions, but no rain as had been forecast. The swim at this race is in a local "lake" and due to the size constraints it is actually a 3-lap swim. After a slight delay waiting for the sprint competitors to finish, we were off in the 2nd and last wave of the 1/2 Ironman race. Trying not to swallow any of the swampy water (esp. after last years stomach issues early in the run at this race! no wonder they don't normally allow you to swim in there) I got into a strong and steady rhythm. I have worked extensively on my swimming this past winter and I was hoping it would pay-off. After the three laps I exited in 25mins 21secs...a new swim PB by 4 minutes. It was a good start which always gives you a boost as you run to transition (over grass and sea shells of all things!) First Goal accomplished 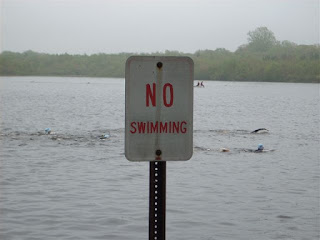 Now out onto the bike and try to catch all those people ahead in the earlier wave...that's the good thing about being in the last wave you have lots of people ahead of you to chase. Last year at this race the wind was blowing a gale but fortunately it was nowhere near as strong and the first half of the lap was either a crosswind or a tailwind. The second half of the lap was tougher as we turned into the headwind but it certainly wasn't a major issue and you could continue to plow through it. The 56 mile bike was two laps and I went through the first lap in 1hr 10mins.

The wind had started to pick up on the 2nd lap and the front of the field had begun to spread out....there definitely were not as many people to pick off and so I knew that I must have been relatively close to the front. My 2nd goal of the race was to ride sensibly and strong on the bike, not go out to fast and blow, but yet to still push the pace. My 2nd lap was pretty much the same as the 1st and I came into T2 after a 2hr 20min 54sec split (23.8MPH), which was good enough for the 9th fastest bike of the day. At this point in the race I was lying in 13th place but we knew that some of the these people had a 9 minute head start from being in the first wave.

T2 was quick and for the first time in a triathlon I decided to run with my garmin to give a better idea of pacing etc etc. I knew that if I ran well I would be under 4hrs 30mins and a new PB. Running well in this race was the MAJOR goal and I started out at 5min 55sec/miles and held this for the first 5 miles.

I had already run down three people in front of me and I was sitting in 10th with 6 miles gone. The weather however, was dramatically different from the forecast...so much for the clouds and 65 degrees. It was now blazing sunshine and mid-70's, the run had no shade and amongst the Garden State's endless fields it was getting hot. The run is an out and back Y shape course and so you get to see the people both in front of you and behind you....going through 7 miles I was still holding 6mins 10secs pace but it was feeling much tougher and through till mile 10 it was real hard. You always go through one of these spells in every race and you just have to push through until you begin to feel better (well hopefully until you feel better!). Getting to mile 10 I was now in 8th place on the road and I was gradually reeling in the 7th place runner. Also at mile 10 I begun to feel slightly better and was just telling myself that there was less than 20minutes to go...that always helps as you know the pain and suffering will shortly be over!

I never managed to catch 7th place but ended up about 20secs behind him....after all that though he was in the earlier wave and so I was already close to 9 minutes up on him! So coming into the finishing straight I had ran 1hr 22min half marathon for the 5th fastest run of the day (and a new 1/2 Ironman PB run split by 7 minutes) and I ended up with a 4hrs 12mins 47 secs finish....a new PB by 18minutes. Finally the run had come together like I knew it could and the training has paid off....all the race goals were accomplished and now it is onto Eagleman to try and challenge for one of those coveted Hawaii spots! Funnier things have happened :-) 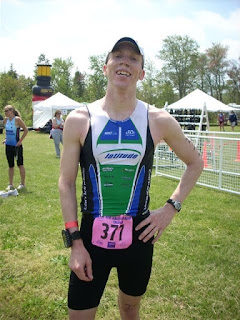 Overall I was 7th and 2nd in age group.....the 30-34 age group were studs at this race, of the top seven finishers five were in the 30-34 age group and three were in the top five! (Fortunately only one of them will be at Eagleman!) If anyone is looking for a ideal warm-up race to Eagleman then the Devilman is certainly it.....the bike courses are almost identical in character (flat, windy and fast) and the run courses are both flat and open to the power of the sun! And on that note I have probably the worst sunburn ever from a race after yesterday....thinking it would be cloudy I went without suncream and now my arms and shoulders are a devilish run!
Posted by Iain Banks at Monday, May 05, 2008

GREAT JoB... I love how you have videos on there too. I wanna do that- maybe next race. 4 min. on a swim PR is amazing. Keep at it and best to you on the next race!