As nice as the weather was on Saturday in Richmond it was as bad on Sunday....typically the race was on Sunday morning! A light drizzle greeted us in transition and a high of about 60 degrees....I think Sarah was wishing it was more like Saturday, which was sunny and 85 and we were watching the off-road duathlon while sitting outside the deli with a coffee and a smoothie!

So Sunday started with the obligatory 5AM wake-up call and we got down to transition at about 6AM. With only about 375 racers the queues for timing chips and marking weren't too bad and by 6:30AM I was beginning to warm-up for the 7:00AM start. I was in the first wave of Men 39 and under.

So off we went blazing down the wet grass hill......the run course was a bit bizarre. The run was on a mix of trail and pavement and was completely different to the run of the off-road duathlon (I guess they were using the trail for the bike course) and also from the Worlds last year. With the addition of the rain the run course was muddy in parts but nothing which wasn't runnable, although it probably did slow times slightly. I got caught behind a few slower runners at the start and had to wait for a wider section of the course but before long the field had sorted itself out and we were over the pedestrian bridge and onto the trail. 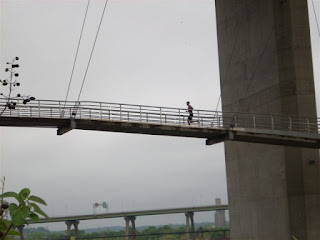 The first run was two 5km laps and was essentially an out and back course, which once the two later waves had started made for a cramped run in some places. Coming through the first lap in 18:25mins I was generally pleased as the 5km/10km speedwork hasn't been a huge priority and I wasn't too far back from the leaders. Onto the second lap and this was where we encountered some of the traffic from the other waves.....overall it was actually a fun course with lots of switchbacks, bridge crossings and a climb back up to transition. Coming into T1 I was in 6th place and ready to roll on the bike.

I had decided to go with the disc wheel as I generally thought that it would be good preparation for the 1/2 Ironman this coming weekend. In hindsight with the weather conditions and the technical bike course it probably would have been better to stick with the HED 60. 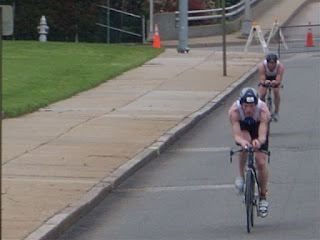 Much of the bike course was similar to the World's and again like the run was an out and back course of 10km that we covered four times. The cool part of the course was the switchback climb out of transition that we did every lap. The rain had made the roads slippery particularly around the more technical section of the course near the lakes and park. The leaves and general "green" muck didn't help and I saw a number of people wipe out on the tight turns. After almost going down on the first lap I decided that caution would be the best strategy and just took it nice and easy around the turns for the rest of the race. Due to the course being only 10km in length the later laps were a bit crazy with every rider being out on the course and it made for interesting passing manoeuvres! In terms of my actual ride, it was ok. I felt as though I could never get it fully cranking but I think that may have been more the style of course rather than my legs. I know that I only got passed by a couple of riders and with the 6th best bike leg in age group it couldn't have been too bad. 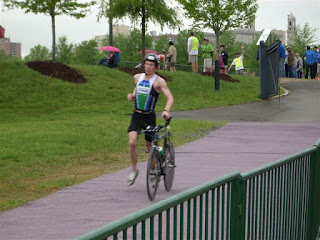 Coming into T2 I was 5th in age group and there were a few guys ahead that were within catching distance. Out onto the last 5km run and another lap around Belle Island and the trails. Within the first mile I caught the guy in front and typically he was in the 20-24AG and then before the turnaround I caught another 25-29AG guy, I was moving up overall but not within the age group. The second run was good and I felt strong and posted a 18:53min lap, which was 2nd in AG and 9th overall. That gave me a 2hrs 6mins 35secs time and a 16th overall place and 5th in age group. (The winner in my age group who was also 1st overall did 2hrs 2mins). 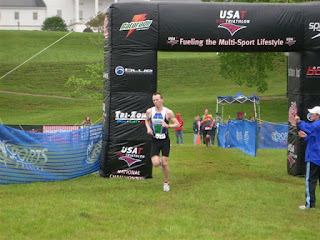 All in all it was a consistent race and a good warm-up for this weekend's Devilman triathlon. I will have a full week of taper behind me, which should help. Hopefully I will feel better on the bike (the course is generally flat and fast, although can be very windy) and am aiming for a sub 4hrs 30mins time.

A big shout-out has to go to Sarah who also braved the rain and cold weather on Sunday and did a great job being Team Banks Sherpa, photographer and cheer squad! It wasn't the best of conditions to spectate in....I'm sure she is looking forward to the summer races even more now!
Posted by Iain Banks at Monday, April 28, 2008