This past Sunday was the first race of the year at the B&A Trail Half Marathon taking place in Severna Park on the hiker/biker trail that runs between Baltimore and Annapolis. I had previously done this race back in 2006 and so knew the course and a rough estimate of a finishing time.

To say that I hadn't tapered for this race would be an understatement....I had just come off my biggest run week of the year, had completed a 4 hour bike ride on the Saturday morning and then begun to decorate the living room in the afternoon. I knew that I would be running on tired legs and it would probably give a good idea of how strong I am at this time of year. 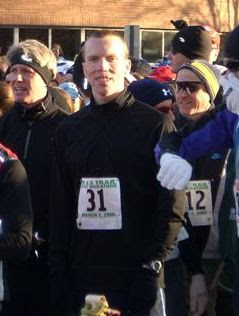 The start was chaotic to say the least,in conditions just above freezing and after two start line changes, the 655 runners were eventually off and I made my way into the top ten....first mile 5:59, perhaps the legs aren't that tired! The course had changed slightly to miss out a hill in the first two miles and we were onto the trail after about 10 minutes. Passing through the 2 mile marker after another 5:59 mile I was running in 6th place.

It was at this point that the legs began to let me know that the ride of Saturday was going to come back and haunt me for the next 11 miles. The 6min/mile pace held until about mile 3.5 and then I had to back off slightly and ran the next couple at 6:15. Sarah had decided to dart about the backroads to see me at various points and I saw her first at mile 4...where I was still in 6th.

The trail is pretty much dead flat and my legs were grateful for that. Coming to the halfway point and the only hill on the course I was still in 6th and turned at 40:50 mins (I think). Coming back up the hill I was passed by a couple of runners and fell into 8th, where I would stay until mile 11.

The second half of the course I was hanging on and really trying to push on with the legs getting heavier and heavier....I still managed to put out 6:15miles so it wasn't a death march but no scooting along. I saw Sarah again at miles 9 and 12 for the obligatory photo opportunities! 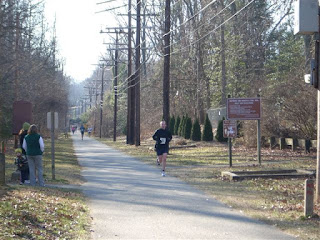 Over the last two miles I dropped to 9th and held onto a top ten finish and a 1hr 22min 47sec time (6:19min/mile pace), which was also good enough for first in Age Group. Back in 2006 I had run 1hr 19min 58sec, so although slower I was relatively pleased overall as I hadn't tapered and was on tired legs.

Next race up is the Suntrust National Marathon on March 29th, my first stand alone marathon and a race I will taper for in order to try and get under 3 hours.
Posted by Iain Banks at Monday, March 03, 2008

Labels: B and A Half Marathon, Race Report

WOW! Nice job Iain. Smokin it even after tired legs and all!!

Hi Lain, I was at B&A too. It was my first Marathon. I did it in 4:41. But, I did it! I stumbled onto your blog researching the OD Northeast Tri in August, looks like you really enjoyed it last year. I can't wait! Best of luck and keep enduring!! Kate