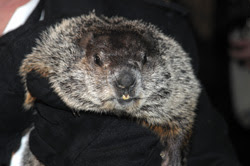 This past Saturday, February 2nd, at Gobbler's Knob on the famous Groundhog Day, Punxsutawney Phil, the Seer of Seers, Prognosticator of all Prognosticators, Rose to the call of President Bill Cooper and greeted his handlers, Ben Hughes and John Griffiths. After casting a weather eye toward thousands of his faithful followers, Phil consulted with President Cooper and directed him to the appropriate scroll, which proclaimed: "As I look around me, a bright sky I see, and a shadow beside me. Six more weeks of winter it will be!"

Well, to be honest this past week I thought that good ole Phil had lost his touch after 120 years of forecasting....here I was running in shorts and t-shirt (luckily for the other people on the street!) and it was only the first week in February. It was 70 degrees and a record high, none of the usual cold wintry mix weather that we are accustomed to in the Mid-Atlantic region at this time of year.

I shouldn't have been so quick to raise doubt in Phil's talents, after all he hasn't been wrong since he got the forecasting gig in the 1800's and why would he start now....even global climate change can't fool Phil! The weekend forecast is back down to below freezing with a chance of snow showers. No cycling in shorts and top just yet, so look for the michelin man aboard a Bianchi and that will be me!
Posted by Iain Banks at Friday, February 08, 2008