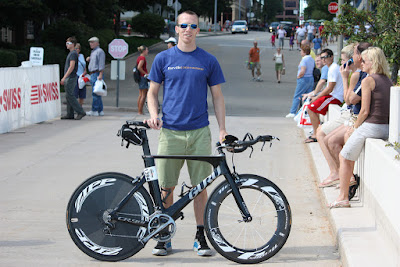 Rocking the Guru at IMWI
With the race season winding down, I have got back on the bandwagon and decided that I should get back to a bit of blogging....good timing eh! Perhaps it will provide motivation through the winter...
So the big race of the year has come and gone, I completed my 5th Ironman race at IM Wisconsin but it was also my slowest. Coming into the race although I felt fit, I knew that I didn't have the training volume of previous years. There had been some big changes in 2011 (opening of Parvilla Cycle and Multisport) and high volume training had been one of the things sacrificed. As the season's results had shown, I could compete at the shorter distance races but the longer races were a stretch too far.
We were fortunate that friends Lisa and Mark were able to join us on the trip to Madison, WI and watch their first Ironman race. Heading out on Thursday after landing in Milwaukee, we played spot the first cow and surprisingly it took us almost an hour....so much for America's Dairyland! Getting to Madison, I registered, did all the usual stuff....sign that you don't claim Ironman responsible if you die while racing , weigh-in, check out all the nervous first-timers and then get herded into the store to spend even more money on IM merchandise.
Rather than being gouged for a hotel in downtown Madison, we stayed out of town close to the bike loop, which enabled me to get out and shake the legs a little bit on Thursday night. Being close to the course helped Team Banks on race day as they knew the shortcut to get to the course and beat the crowds.
Friday was a nice and chilled day.....course swim in Lake Monona during the morning and then a run in the late afternoon. We also drove the bike course to see what I had let myself in for! The bike course is the hardest of the Ironman I have done and wouldn't disappoint on race day. It is just 112miles of constant hills. Friday was the start of the beating that Sarah and I took all weekend at pool courtesy of Lisa and Mark. I claimed it was because I was tapering but I think it was just a lack of talent.
Oh I still haven't mentioned how odd a town Madison really is.....it is the State Capital of Wisconsin but seriously no-one appears to live, work or do anything downtown.....I have no idea where all the protesters came from over the Summer when the budget issue was around! The only thing you see are the students from UoW.......50,000 strong but mainly based on the campus just outside downtown. Downtown where the race was hosted was like a scene from a Zombie movie....just a bunch of triathletes (compression socks and visors compulsory) wandering around in slow-motion looking for their next Gatorade victim.
After the usual Saturday racking of the bike and bag drop-off, it was time to get mentally prepared for the race. This is where it was like no-other Ironman race I have done, I wasn't nervous, I slept really well the night before and I was calm on race morning........perhaps it was because deep down I knew that I would be racing to complete rather than compete (nice ring to it don't you think?)
Racing for a Kona spot is always the goal and I knew that I would need a sub-10hr finish to be competing for that.....probably a long shot based on the training.
The swim was fun and oddly enough it was the first time that I had raced with a wetsuit all season. With the course being a pretty long rectangle, which we did two loops of, it wasn't as brutal as other courses. Finding feet or open water wasn't too difficult and being able to see the shore with the masses of supporters was cool. Coming out in 1hr 5mins was better than I expected and about normal for me. It felt as though I had been in the water longer so it was a nice surprise. Running up a parking ramp helix for three levels wasn't that much fun though and that took us into transition. Not just a tent in the middle of a parking garage, nope we were allowed inside the convention center, I would even go as far as saying it was a little swanky :-) 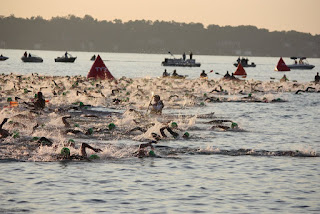 Onto the bike, down the three level helix and away from town. There was short section of bike path with no passing allowed heading out of Madison but other than that it was smooth sailing under sunny and hot skies. I would have appreciated the scenery if it wasn't for the fact that my heart was trying to beat its way out of my body. It took forever to get my heartrate down to where I wanted it to be and my legs were not feeling good. The hills had started to come at us like a never ending rollercoaster so it was tough to get into any kind of rhythm. Gradually the heartrate began to come down and the legs were feeling better, now it was just an issue of upping the power and overall speed.
Unfortunately the power and speed never came and I was actually relatively steady all race with the exception of miles 60-78 where they had decided to put quicksand on the road and I slogged along (it felt like quicksand anyway). Despite the hills it was an awesome bike course and it must be great for training in that area.....during the summer month ;-) Some of the steeper hills were packed with supporters and that is where Team Banks camped out for the day......they decided not to wear speedos and compression gear though! 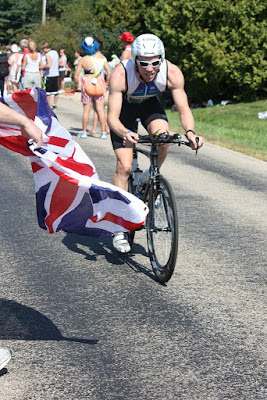 Climbing past Mark bearing the Union Jack- Made him feel he was at the Tour :-)
Finally the hills stopped, we picked up a nice wind and hightailed it back to town, well as much as you can after 100miles with a marathon pending. Bike time was 5hrs 37mins.....to get under 10hrs I was going to have to run a touch over a 3hr marathon, oh it was in the high 80's and bit of a scorcher!
The first two miles of the run were great, I was glad to be off the bike and they flew by in about 7:15min/mile pace. This is where you start thinking, maybe, just maybe........then BOOM! The legs realized that they been working out for 7hrs already and although it was nice to be running there wasn't a lot of horsepower left. Mile 3-4 got us in UoW Camp Randall Stadium and running around on the turf, that was cool but didn't offset the fact that the legs were unwilling to cooperate anymore. Before long I became an extra in the LMFAO video and "kept on shuffling"....
Pre-race we had strategized like an army going to war and Team Banks were back and forth on the run course seeing me a total of 8 times in 26.2 miles. Luckily I shuffled a bit quicker when I saw them so seeing there loads was a good thing :-) 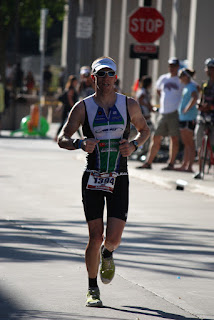 Being out on an Ironman course gives you plenty of time to contemplate what is going on and what is going to happen. I knew that the chance of a Kona spot had gone and I was already thinking ahead to the Winter, Spring and the May 4th race at Ironman St. George. This would be motivation to restructure the training program and really think about what needs to be done to get back to competing at Ironman distance.
Check out the video of my finish here

As I ran across the finishing line in 10hrs 53mins for 136th overall (out of 2500) and heard those tingling words of "You are an Ironman"......I was disappointed not only for myself but also for Team Banks, Sarah is so supportive and believes in me so much that I want to get to Kona for her as much as for me.
Focus and dedication.......2012 will be the year! I think I just heard Sarah shout (supportively of course) "I've heard that before" :-)
Oh, amongst all the bad news of having a sucky race, there was a bright spot.......running a marathon in my Ecco Biom's was sweet, no blisters, no loss of toenails, you can't ask for much more than that :-) 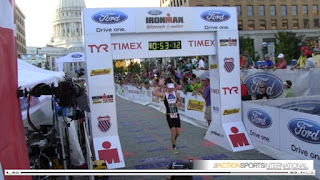