Wow, this came round quick! As the first race of what is going to be a long season, this was half marathon was always going to be interesting. In previous posts I have stated that training has been a bit sporadic so far this year and with big races late on in the season, the first few months of 2011 have really been a base building. So yesterday I got the first race done and dusted and it turned out pretty much like I thought it might.

Race conditions for a half-marathon were spot on, a chance of showers and almost ideal temperatures. The pre-race build up had gone well although I didn't really taper at all with an hour run two days before and a group ride of 50miles the day before. I had however, been using Hammer Nutrition's Race Day Boost to aid in the buffering of lactic acid, increasing glycogen storage and increase time at anaerobic threshold. It was the first time using the product and besides the slightly odd taste, it goes down pretty well. What would the results bring on race day though? 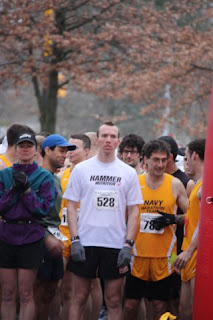 
A quick banana hammer gel with 30mins to go till race start and then a warm-up. For this half-marathon there wasn't much of a gameplan, I knew that I hadn't put in as many miles as last year by this point but had done plenty of tempo. So with that in my mind I went at the gun and wanted to hang onto the leaders for as long as possible. For the 4miles I was sitting in 2nd and pushing out 5:45's with the leader pulling away down the trail. I knew he was rocking and had settled on protecting 2nd place. 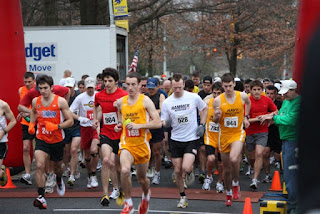 Between mile 4 and 5, the runner in 3rd gradually came up alongside and over the next mile we ran together. It was at the turnaround and coming up the only hill on the course that he pulled ahead to which I couldn't respond. By this time I had settled into a 6:00min/mile pace and actually felt okay considering the lack of big training miles in the legs.

The good thing was that I wasn't dying and the chase pack was more lone wolves than a pack. It's always good to know that you have a gap. Coming back up the trail is fun as you get to see all the other racers heading to the turnaround, I don't know what would possess some people to go shirtless on a rainy, cold Sunday morning!

Coming up around mile 11, I heard some footsteps from behind and gradually I was caught for 3rd. By now the 6:00min pace had begun to get a bit harder but I was still in 4th with 5th a good distance behind.

With the rain starting again, I crossed the line in 1hour 19mins 06secs for 4th place. It was a 6:02/mile pace and although slower (by 2.5mins) than last year it was a good test for the early season. With the duathlon long course nationals in three weeks time, it bodes well that the leg speed for the two brutal 10kms should be there. 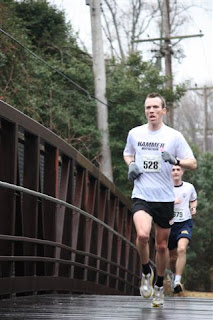 Now for the Hammer Nutrition review.....well the gels are a given, I've been using them for years but this was the first time using Race Day Boost and I have to say I was impressed. The main effect I found was that once I settled into my race pace (which was at 6:00min/miles on this day)after the initial starting surge, I was able to stay there for entire race. It definitely increased the time that I spent at threshold with no drop-off towards the end of the race and enabled me to race to the top five and the age-group win. I'm looking forward to seeing the benefits for the A races later in the season.
Posted by Iain Banks at Monday, March 07, 2011

Labels: B and A Half Marathon race report, duathlon, hammer nutrition