With the weather forecast to be rainy and windy on Saturday we decided to do the Swami route on Friday as the weather was sunny and no rain until late in the day. Friday was going to be 80 miles and would consist of approx. 5000 ft of climbing.....a great day of riding. Fortified by the abundance of cinnamon buns at breakfast we headed out through Escondido and then hit the big climb of the day up to Lake Wohlford. The climb was part of the Tour of the California back in 2008 when the stage finished in Escondido. It didn't disappoint either as the climb was hard but rewarding with great views....luckily the road was closed to vehicles because of some road work and it allowed you to follow the racing lines. 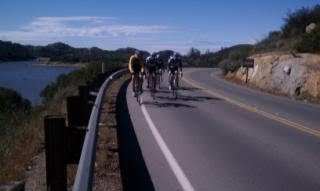 Next up was the run through Hellhole Canyon to Valley Center where we stopped briefly for fluid and a great selection of scones (Orange Cranberry was the flavor of the day). From there it was mainly rolling roads all the way through Lilac to Hidden Meadows and back onto the San Luis Rey River trail which took us to Oceanside. By this time the bad weather was chasing us and it was hell for leather all the way along the coast to the hotel. So much so that we didn't even stop for coffee in Encinitas! 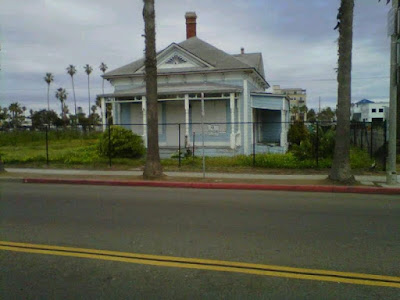 House from Top Gun in Oceanside

It ended up being an 80 mile day with just over 5000 ft of climbing and then after a trip back to town for coffee and cake, a 6 mile tempo run before dinner...for me that was the first big double of the year and the first of many over the coming weeks as I prep for Duathlon Nationals and American Zofingen. 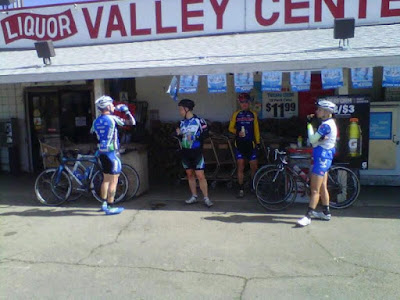 That brings us to the final day of camp and we the weather looking a little ropey for the morning we had a late breakfast and a small strength training session with John before heading out for a gentle final 2-hour ride. Most of the legs are now a little tired and so it ended up being a coffee shop ride, with a great stop at Pannekin in Encinitas (I would recommend the blueberry muffin).

Camp totals for me was 25 hours and 400 miles. 22 hours and 375miles riding with another 3hours and 26 miles of running. If ever you want a camp out in San Diego give John Howard a holla and he will be able to help you out www.johnhowardsports.com
Posted by Iain Banks at Saturday, February 19, 2011