Day 3 of the camp today and once again it was sunny skies after a light fog was blown away. The first reminder to self was to keep Stu away from the cinnamon buns at breakfast!

Much to John's chagrin we rolled out just after 9am (I think he was hoping just after 8am!) and we turned in land to hit the highlands of San Elijo, Escondido, San Marcos and Rancho Santa Fe. It was good to hit some hills and preview some of the Swami ride that we will hit on Saturday morning. We know where the midway sprint line is now so Ace and Robin have no excuse not to win :-)

We also rolled into the Jelly Belly pro team out for a ride, fortunately for us they were heading the opposite direction meaning that we didn't even need to pretend that we could hang on for a few miles. Going inland made a nice change from the oceanfront riding of the past two days and to some extent was the California that I had expected to see. The landscape was very reminiscent of southern Spain and riding past the lemon groves provided a great scent! 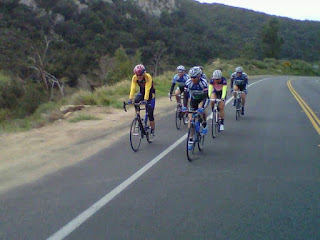 After lunch in Rancho Santa Fe, we headed back to the hotel to drop John off and most of us (Stu, Ace, Matt, Robin, Denzil and myself) rode back out to get our daily intake of ocean air. A brief detour to Nytro was made before heading down the PCH and stopping off at Torrey Beach and setting foot into the Pacific for the first time. A nice little hammer back to the hotel and it was a 3hr 30min ride and time for a bodyfitte session with John.....after he grabbed three of us from the hot tub. 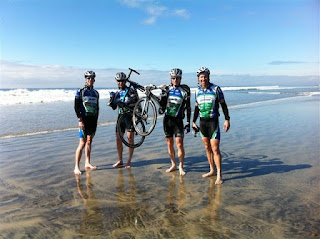 While some of the others got a massage, I headed out for my daily run and was fruitless in trying to find a 5 mile flat route. I did my best to have a recovery run but it still included a few hills. The good thing was that it included the beach and the sunset was perfect tonight, especially as it was setting on a whole host of surfers.

Tomorrow we hit a local midweek group ride in Carlsbad.....should be fun and obviously we have to represent the East Coast,Mabra and ABRT!
Posted by Iain Banks at Tuesday, February 15, 2011

Is the infamous Raleigh Boy Bobby Phillips out there getting in miles with you?

Yeah Bobby is out here with getting in some miles with us. He rode the track the other day too.