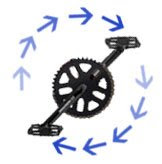 180 revolutions per minute is what 40MPH on a fixed gear bike is (with a 46x16 gear ratio)! It's definitely one-way to work on the cadence but to be honest I got to 40MPH and the legs just wouldn't spin any faster and I had to brake before being thrown off....Unfortunately the rest of the group, besides Greg who was also on his fixie, continued to blast down the hill and we had a hard 30 miles 2-up into the wind to make it home (with no coasting!). With just about a month gone riding the fixie and nothing but the fixie, I would say that the legs are getting a great workout every time I ride.

Currently the weekends include the club group ride on Saturdays for a 70 mile total and then hill repeats on Sunday. During the week I have started to incorporate intervals to work on lactate threshold as well as sprints (esp. important as my sprint and jump suck!). I do have a slight break from the fixie if I get onto the trainer as I have the triathlon bike on there. As of yet I have only hit the trainer a few times. If it's not raining out then I always manage to hit the pavement rather than staring at the garage wall!

It must look pretty funny seeing a cyclist bundled up against the cold and then his legs spinning around at crazy speeds on the downhills....probably very cartoonish! With any luck I will have my road bike up and running by the end of January just in time for the first training races of the season and in time to start using gears!....we will see then the impact the fixie has had.
Posted by Iain Banks at Monday, December 15, 2008