Last year was my first foray into Ultra Running and I completed two 50km trail races. Although they were huge amounts of fun, they are very demanding and take a long time to recover from. As a result I have not scheduled any Ultra's until the Fall for this year leaving me to concentrate on triathlon races. Hopefully I will be able to schedule the JFK 50miler in late November.

I found last year that not only do Ultra's take a while to recover from, they also detracted from my triathlon racing. The training for Ultra's meant that I was doing more long distance slow runs and also cycling less. I was running strong but not with the pace needed for triathlon.

Without the Ultra training during this spring I was able to keep the cycling hours and concentrate more on tempo running which produced a fast marathon and PR's in the triathlon races so far. However, with the weather getting better and the nights longer I will gradually get back out onto the trails to make a change from the pavement....and besides running on trails is so much more peaceful and fun! 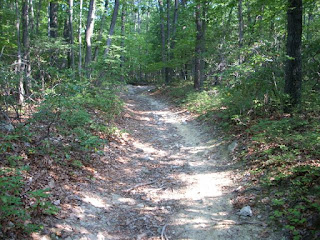 ooooh, I LOVE the trails, I so want to run in that photo!

That trail was part of Catoctin 50km from last year that takes place near Frederick, MD. If you happen to be near Maryland on Aug 3rd!