Finally the weekend arrived and the "A" race of the year was upon us. On Saturday morning it was good to see that the temperatures had dropped but bad to hear the wind whistling. One thing you don't want at Eagleman is the wind as this can make the swim very choppy and the bike course brutally tough....a bit like last year really! To get the legs raring for Sunday I did a short 45minute bike ride on Saturday morning and then made sure that all my gear was packed. After a long-distance pep-talk from Mum and Dad, Sarah and I headed off to Cambridge on the Eastern Shore. Cambridge isn't too far from Bowie and we arrived a scant 90 minutes later, after the obligatory pit-stop at WAWA to get cheap gas (for those in Blighty, WAWA is a bit like "Alldays" really but on an American scale) and road-trip supplies.

Upon arriving in Cambridge the wind was blowing at a good clip of 20-25MPH and the Choptank River looked...well, pretty damn choppy! I did all the usual stuff, such as picking up the race numbers, getting the bike and helmet checked, and then racked the bike in transition ready for the following morning. We also stayed at the race Expo for a short while to listen to the Pro-Forum, where distinguished professional racers such as 6-time Hawaii winner Natascha Badmann, Chris Legh and Desiree Ficker did a question and answer session. However, with the afternoon wearing on, it was time to head back to Easton (about 10miles from Cambridge) to check into the hotel, put the legs up and find a restaurant to get the pre-race pasta dinner. After a short search around the historic center of Easton, we found a great Italian restaurant called "Scossa" where the highlight for me was the chocolate souffle for dessert (Even pre-race you can't refuse a dessert!). It was then to bed at 10:00PM in order to rise on Sunday at 5:10AM.

Just as the sun rose, so did we. My race start was at 7:37AM, almost an hour after the pro's started at 6:45AM. Fortunately the wind had dropped and was a tame 5-10MPH, almost ideal conditions when combined with the lower temperatures and cloud cover. After the usual pre-race breakfast of oatmeal and pop-tarts, we headed off to Cambridge to get the day started. As you can imagine, the town gets pretty crowded with over 2000 racers and all the volunteers and spectators trying to converge to the start at the same time. Before too long it was approaching 7:37AM and it was time to squeeze into the wetsuit (wetsuits are perhaps the most unflattering piece of clothing ever made....they are made to be worn tight as once they get wet they allow the water through and expand. Before you get in the water though you do look a little odd!!!) 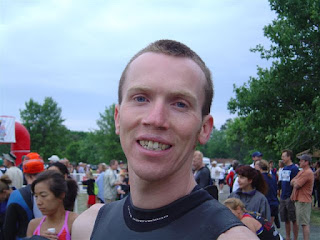 And so we were off, in total there were 79 racers in my age group and we were combined in the same wave as the male racers 18-25...in total about 115 people in the wave. Now, this is where being color blind certainly doesn't help. The swims in triathlon are outlined by yellow buoys and then orange buoys designate the turn points....not good if you have trouble seeing the difference between yellow and orange at the best of times, let alone when you are in the middle of the river with goggles on and trying your best to go as fast as possible!! It was made slightly more difficult in that for the first time during a race my goggles began to fog. I made it round the first turn and was having difficulty sighting the buoys so had to de-fog the goggles "on the swim" so to speak. After that I had 20/20 vision back again and decided to try and push hard for the final 1/2 of the swim, it helped that we had the tide pushing back to shore. I exited the water in 29mins 39 secs, up 5 mins from the last years race and close to a PB for the swim. I was in 24th position in my age-group. 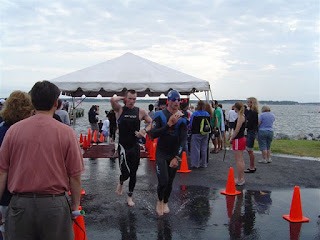 The transition area this year had changed slightly and so there was a longer run to the bike. My T1 has got much quicker the past few races and within 3mins I was out onto the bike. 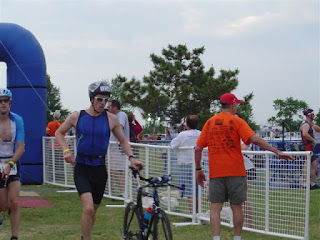 The Eagleman bike (56miles) has a reputation for being quick, but it can also be very windy and deceptively tough. Coming out of T1 the first miles flew by and I was cranking out a good 24-25MPH and feeling good, passing people in my wave and those in the waves before. The trick with Eagleman is that it is a circular loop of 56miles and so you know that if you have a tailwind, at some point it will become a headwind. The headwind section came between 36-48 miles and it was important to try and push through but not burn yourself too much. I was still driving along at a PR pace and began thinking about the run and what the rest of the field was doing. The trouble with many large races is that you generally have very little idea as to what place you are currently in. You only ever really know if someone in your age-group has overtaken you or you have overtaken them (each racer has their age inked on their calf). So coming into T2 I had no idea where I was in the race and was just concentrating on going as hard as possible. My bike time was 2hrs 24mins 23sec for an average of 23.4MPH and it was a new PR. 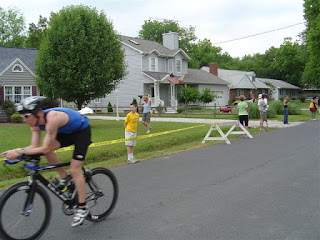 After the bike I had climbed into 10th position overall, with the run to look forward to! My T2 was 4th fastest overall in my age-group and got me out onto the run in under 2mins.

The run has typically been my strongest part of the triathlon and I was hoping that a sub 1hr 30min half-marathon would bring me home in under 4hrs 30mins. I knew that I had biked hard and that it may come back to haunt me on the run. The first two miles of the run were fine and I clocked 6min 30secs miles but then I started to feel the effort of the bike. 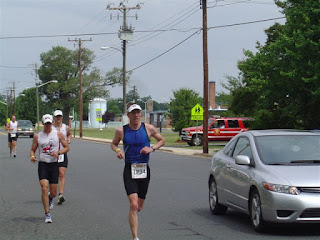 I was feeling thirsty and was paying for working too hard on the bike and decided that I needed to drink well at the aid stations and get some energy gel into the system. My pace had slowed to just over 7min miles and luckily the gels did the trick and gave me the boost to quicken the pace. The final three miles were tough as I was rapidly running out of steam. The finish line couldn't have come any sooner. My half marathon time was 1hr 31mins and meant I crossed the line in 4hrs 30mins 25secs, a new 1/2 Ironman best time. 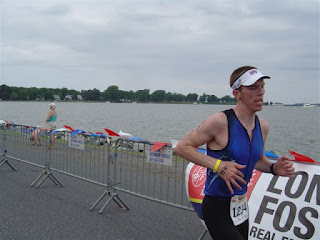 That time was good enough to give me 8th place in my age-group and 98th overall out of the 2100 racers. It was also a time 16 minutes quicker that I had done last year in this race. It was definitely the hardest race that I had done and as I had mentioned in a previous post I had remembered to race and it paid off with a new PR. After some much needed drink and food, it was then the long wait to see the final results and see if I had managed to qualify for the World Championships.

The Hawaii Ironman World Championships spot was taken by Andy, a teammate from ABRT, as he had won my age-group in a lightening fast 4hrs 10mins!!!. He then declined his 70.3 World Championship slot, which left three open spots. The wait then continued as the roll-down started and racers in positions 2-7 only took one spot (they either declined or had already qualified) and so when my name was called the 2nd spot was available and duly taken. I had qualified for the World Championships in Clearwater on November 10th. Mission Accomplished!!! Now the aim is to go under 4hrs 30mins in Clearwater...
Posted by Iain Banks at Monday, June 11, 2007

What a fantastic result. You're a real star. Following you on Ironmanlive was totally exhausting. We never had any doubts of course that you'd qualify for the World Championships. Like we said before - see you in Florida. Only 151 days to go.