May 2015: Training Ramblings....Road Racing and Gambling against the House!

May ended up being a good month in terms of volume but it just seemed that I never got into a training rhythm. There always seemed to be a break one way or another through work or something else.

One thing that didn't get off the ground was trips to the pool. It was a shocking swimming month and I really do need to be more consistent. I must end up saying that every other month but it really is something that I need to get a grasp on. Like most people I need accountability to really get me in the water regularly. Something like a morning master's class would be great but the closest is some way away. Perhaps I need to call out Greg & Dave to make it to Sportfit with me and then we would all be awesome at our next races!

What I did do in May was continue with some road racing and getting my first road race podium. After racing earlier in the day in the Masters 123 field at Bunny Hop I headed into the Masters 3/4 race with a plan. The plan was to sit in and recover from the earlier race with the intention to follow any promising breaks in the back half of the race. Fortunately nothing was shaking in the first half so the plan was coming together. We were all still together with less than 10 laps to go and I was sitting in the top ten. With 5 to go there was a brief lull in the pace and heading out of Turn 1 I attacked and knew it was now or never. It was only 5km to go and luckily a couple of strong guys bridged over and the three of us drilled it to establish a small gap on the field. With a step on the podium available I probably worked the hardest out of the three to keep the break going and with 1km to go it looked like we had a 50/50 shot of sticking it. Being on the front and laying down the watts was nailing my own coffin for the top step but I would rather have 3rd than nothing at all..  With 200m to go the peloton was closing in, we went round the final turn and my non-existent sprint started and I rolled across in 3rd.  Road racing is a lot like gambling, you have to take chances and more often than not the house wins.....this time the gamble paid off and we stayed away! 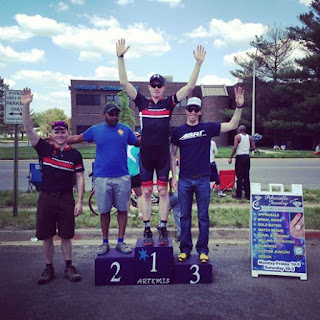 Mum and Dad also headed out from the Motherland for a few weeks in May and were able to take in the sites of Baltimore at the BikeJam race! Having never done that race and hearing all the horror stories about the road surface and various crashes, I was worried what the Master's 123 race would bring!  Luckily it was nowhere near as bad as the stories and it was a fun race if you like racing around at 28mph for a hour with 75 racers within millimeters of your handlebar....no place for personal space in bike racing.

The end of the month was something of a novelty...for the first time in 6 years or so I got to race the Church Creek Time Trial. In years previous I was part of the race director team for the TT so never got to race.  This year we passed the baton to the new ABRT board and they did a great job.  Good news for me was that I got to suffer through 40km of wind on the Eastern Shore.  With less focus on on-road triathlon in 2015 my time has been limited on the Guru Cycles TT bike this season and it showed with a just about sub-hour time (59:00mins). The wind was some of the worst that I have experienced on the Church Creek course so times were down throughout the field. Hopefully the race redux in July will be better weather conditions and I will have spent a bit more time on the TT bike by then.

In other non-racing news I was able to spend a couple of rides out at Fountainhead Mountain Bike Park, which is a great trail system that challenges me to improve my technique as I look to the season's Xterra races.  With only 6 months under my belt after 10 years off the mountain bike it's taking a little while to get the flow back as well as the cojones to ride some of the more technical trails. Gradually I am getting back into it! Oh and I also formally got my invite to Xterra Nationals after my result at Xterra Jersey Devil.

So that was May.....a month of road racing and a bunch of fun!

What I am drinking this month:
Four Barrel Coffee:  COTECAGA / BOURBON / RWANDA: The Cotecaga wet mill was built in 2006 in the Nyamasheke region.  It processes coffee for over 1,700 members.  The establishment of this new mill some 7 years ago has given the area the infrastructure it needs to turn a quality crop into a marvelous bean.  This is welcome in a country whose coffee production has much more often been hampered by issues of processing than problems with microclimate, terroir, or harvest.The bourbon varietal is ubiquitous among specialty-grade coffees exported from Rwanda.  The selection at hand demonstrates the body and corresponding chocolate and molasses tones which often accompany the varietal.  The current specimen is distinguished by tones of caramelized red pepper, presenting as complementary simple sweetness with a subtle savory character